A British Columbia tendering dispute that first went to court in 2006 has finally came to an end this morning. The Supreme Court of Canada (“SCC”) has just issued its judgment in Tercon Contractors v. British Columbia. The case was widely seen as a test of whether limitation of liability clauses in a Request for Proposal (“RFP”) could ever completely exclude damage claims by frustrated bidders. The SCC concluded that RFP’s may have such clauses but ruled the clause in question was not broad enough.

In 2000 the British Columbia Ministry of Transportation and Highways (the “Province”) issued a request for expressions of interest (“RFEI”) for designing and building a highway in north western British Columbia. Six teams made submissions, including Tercon and Brentwood Enterprises Ltd. Later that year, the Province informed the six proponents that the Province now intended to design the highway itself and would issue an RFP for its construction. Under the terms of the RFP, only the six original proponents were eligible to submit a proposal. The RFP also included a clause excluding all claims for damages a bidder might suffer “as a result of participating in this RFP”.

Because it was unable to submit a proposal on its own, Brentwood entered into a joint venture with Emil Anderson Construction Co., a company that was not a qualified bidder. The joint venture submitted a bid in Brentwood’s name only and that proposal was shortlisted along with one submitted by Tercon. The Province was aware that Brentwood was really acting as part of a joint venture but ultimately accepted the Brentwood bid. Tercon sued and the Province defended itself, arguing that the exclusion clause barred Tercon’s claim for damages. The trial judge ruled in Tercon’s favour. The BC Court of Appeal reversed the trial judge and ruled in favour of the Province.

The SCC reversed the Court of Appeal and restored the trial judgment. All nine judges of the SCC accepted that the Province had the right to insert and enforce the RFP damages clause. The judges split on whether the clause applied to Tercon’s claim and, if it did, whether the Province’s misconduct justified depriving the Province of the clause’s protection.

The majority of the judges ruled that Tercon’s damages did not result from “participating in this RFP” but instead from the Province accepting a bid from a bidder that was not part of the RFP process. If the Province wanted to bar claims such as Tercon’s it could have drafted a more extensive exclusion clause. The exclusion in Hunter Engineering v. Syncrude (SCC 1989) was cited as an example.

The minority of the judges found the exclusion clause was sufficiently broad to apply to Tercon’s claim and the Province’s misconduct did not rise to the level where public policy would justify depriving the Province of the protection of the clause.

The good news for the construction industry is that the SCC upheld the right of parties to structure their agreements as they see fit. However, the devil remains in the details. It is difficult to draft contract language so clear as to preclude different interpretations. As always, the best guide is to strive for clarity in language and fairness in conduct. 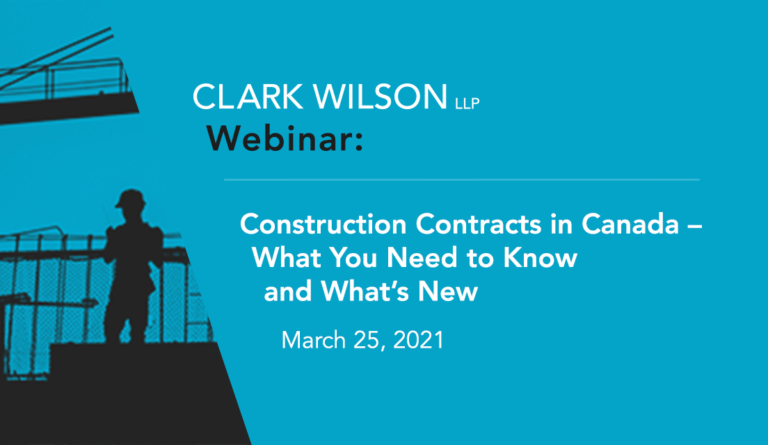